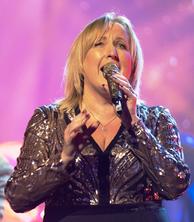 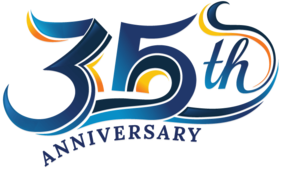 On 25th December 2019 Sharon appeared on the Michael McIntyre's Big Show as his Unexpected Christmas Star. 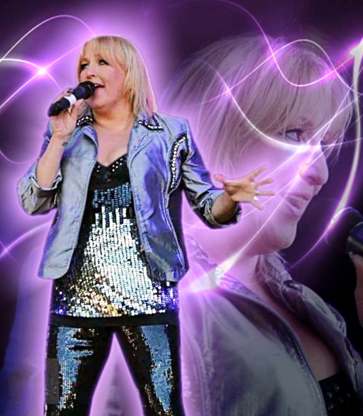 The band were followed by one of the best singers in the entire showcase.

The (then) Blackpool based Sharon Wallace began with the infectious style samba, "Maybe I'm In Love", moving on to "Best Thing That Ever Happened to Me" and finished in stimulating fashion with "My First, My Last, My Everything". Contrasting items that showed her range and personality.

Can only be used when describing the very talented

Sharon,  from Chester is the daughter of respected Chester guitarist from 60's groups, The Pacemakers, Four Hits and a Miss and Jeannie and The Big Guys, then later on Comedy Trio, The Dumkoffs, Geoff Dawson.

She has been on the circuit for nearly 36

years and is adept in all types of venues.

She embarked on this career in 1984 in Rhyl, North Wales, where her first contract was six week summer season.

Following on and for the next six years, Sharon was one half of a duo who gigged the length and breadth of the UK and throughout Germany for

In 1990, came the move to Blackpool, where Sharon

However, she also became a regular in the I.T.P venues, Flamingo's Nightclub, Basil's on The Strand and the former Funnygirl's venue.

If It's Quality entertainment you require, then this is your lady.

The Rave Reviews from

An amazing talent with a matching voice,

allowing her to perform anything from the soulful

The power in her voice is enough to raise any roof and her professionalism and passion for entertaining reflects in her performance and stage presence.

Sharon's experience shows in her ability to adapt to any surroundings, this along with her bubbly personality provides entertainment which appeals to any audience.

Not wanting to be classed as a comedienne, however, with the right  crowd,

is a very funny lady.